A few years ago a friend of mine was heading off on exchange to Denmark for university when she said to me with a smile (and a fair amount of trepidation), “what is wrong with our comfort zones again? Why can’t we stay in them?”. She went on to have a great experience on exchange but I’ve always remembered that moment, it resonated. Why? Because I also push myself out of my comfort zone, sometimes to my benefit and sometimes to my detriment and have found the “comfort zone” in CFS a confusing place to stay for too long.

Having recently ventured back into the dating wilderness (can I still call it that if it starts on an app on your smartphone?) I’ve been feeling nervous and excited and confused by the whole process. And that’s fine, you’re literally going to meet someone to see if you want to spend time with them and if they want to spend time with you, that’s opening yourself up to judgement and putting yourself in unfamiliar territory. I was surprised to find that butterflies had taken up residence in my belly again, they’d been absent for many years since I’d had to stop playing sport, going on dates, going overseas, working and just about everything else in life. As I sat in my car before another first date with an online app-user I remembered the butterflies I felt as a kid doing Little Athletics. I always got nervous before competing and my dad once told me the butterflies helped, their wings would flap me down the 100m straight faster and lift me up over the high jump bar. I learnt to be OK with them. It was strange to be nervous again though, about something like a date, to find myself out of my comfort zone, not sure of myself, to listen to the words spewing from my mouth as apparently the butterflies don’t just make you run faster but also talk faster… And about nonsensical stuff – Susan stop talking. Now!

Anyway, the idea of butterflies being a novelty again made me realise I’ve done little in my life the last four years that hasn’t been to do with recovering from CFS. And don’t get me wrong, it’s had its bloody big challenges but I think I packed myself up so tightly in cotton wool to allow myself to heal I’m out of practice with the new, with the confronting, with the unknown. I literally stopped seeing friends who didn’t make me feel good, energy vampires were expelled from my life, so as for going on a date with a stranger? Forget about it. I became incredibly self-focussed, selfish at times too, I needed to be to make steps forward in recovery. Sure I got anxious about things, so many things, but that was because I literally did not know what my body could cope with and how far to push it. I remember going up to my cousin’s wedding in NSW last year and sitting at the airport in a whirlpool of self-doubt: this was a bad idea, I’d pay so badly for this, was this worth crashing for… I actually had an awesome time on that trip and didn’t crash and that visit to the farm turned out to be the last time I would see my aunt before she died so it was worth it on so many levels. But this wasn’t nervousness, this was anxiety and insecurity about a very real unknown, about the very real chance of crashing.

So, back to the comfort zone and nerves… With my current level of health it would be easy to stay in this place, to enjoy feeling well, to not take any chances, to be sure of no symptoms, to not step out into the world and get nervous, to just exist in my bubble and be. But I’m never going to reclaim a full life if I do this, I’m not going to progress the final, say, 15% of recovery to not have to factor CFS into my life, to fully recover, without getting out of that comfort zone. This means doing things without fully planning them and without designated rest days allocated the next week; doing things that I’m not certain I’ll manage but banking on the fact that I’ll bounce back if it is too much for me.

It means taking a chance and going on a trip on my own without my mum and dad’s support and being ok with that. I did just this two months ago when I flew up to Brisbane to visit my cousin and stay with her for four days. I got to the airport myself, handled the flight well, didn’t freak out about eating at different times as now my blood sugars are stable and that doesn’t matter any more, stepped out into Brisbane’s humidity confident my body could handle it and pretty much talked non-stop with my lovely cousin. We went on adventures to a gallery, restaurants, two different beaches and cruised around the river on the City Cat ferry. I did rest a fair bit as I was really worried I was doing too much, but that was OK, it was a huge step to travel on my own and some anxiety was bound to be normal.

Having just got back from Brisbane I then decided to head back to the mountains again for another ski. I went to the snow with my mum and a friend and skied across three days, loving the thrill of going fast and sideways and up and down on my skis. Having skied in July I knew I would be ok, I knew my legs were strong, I knew my energy levels could handle it, and I knew I would absolutely love it. In this instance I didn’t have to step out of my comfort zone, I’d already done that in July (and August the previous year actually) so I knew I was capable of this test. I even shoveled snow off the steps, knowing my body wouldn’t crap itself at this exertion! And did I crash? Nope. I was tired – oh so tired – but I think everyone is after three days skiing – it’s bloody exhausting.

Stepping out of my comfort zone meant I signed up to do a farmer’s market with my baking business. The Barrabool Baker would be selling cupcakes and macarons at the Inverleigh market and I would be ok! The night before the market I was so nervous though, I triple checked I’d packed everything, made silly mistakes, was jumpy and scatterbrained and wondered if it would all be a big mistake. Luckily my friend Hannah had come down to help me (thanks Hannah!) and she was a good calming influence. And how did we go at the market? We had such a good day! I drove there and back, set up my tent and stall, smiled and chatted and enthusiastically spruiked my baked goods, spent four hours on my feet and ended up selling out! This was a huge step for me, this was me putting myself out there, hoping my body would be ok but really not knowing if it would be. And did I do the next market? Yep, this month I was cool, calm and collected about the whole thing and we even managed to put up my market tent without looking like complete amateurs this time!

The next step out of comfort-zone land was to house-sit on my uncle and aunt’s farm for three weeks which meant cooking and cleaning for myself and looking after two gorgeous but rather recalcitrant dogs. While at the farm I had three different friends come and stay, kept my business going, did some writing, fed myself, walked the dogs, fed the fire large logs of wood at regular intervals and went on a couple of dates. Yeah, that’s a lot, all without Mum and Dad there as my back up if I fell in a heap. And did I cope? Yes I did! I feel so much more confident about my plans to move out of home next year, these three weeks were a great test and showed me I’m further along in my recovery than I thought. As I dropped a friend at the train station about halfway through the three weeks I could hear my body asking for rest. I waved goodbye, did my shopping, drove home and obeyed. The next three days I slept for several hours each day, watched TV, did gentle yoga, ate well, drank lots of fluids and just let my body recharge. I didn’t freak out though, I didn’t plummet into despair, I just acknowledged that I’d done a shit load of activity and my body was letting me know it needed rest. 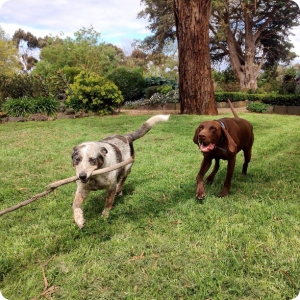 my “dog babies” for three weeks – aren’t they adorable!

I had some anxiety at first though, and wondered if I would crash, but realised I was just “normal-person tired” and that that was totally OK. It’s not my body saying, help you’ve done too much, it’s my body saying, hang on, we’re doing well Suze, but we are not quite fit enough for this, we’re nearly there but not quite. It’s like going for a 3km run after not running in months – you can do it, but boy does it hurt the next day. Does it kill you? Nope, do you feel pain/fatigue from it? Yep. Is that a huge problem? Not really, but next time maybe run 1.5km first.

Since my last blog post I’ve been trying to keep a balanced head about the ups and downs of CFS recovery. I was surprised to hear from a few friends who asked if I was actually OK, after reading the post they were worried about me. I assured them I was doing OK, and that the post had been written across several months and I was not in fact in despair that week (but thank you for checking!). I wasn’t aware though how vulnerable I sounded in that post, how open and raw I’d been. Also, listening to the recorded version this morning before I wrote this, I heard the sadness and despair in my voice, I know that I’m not in that place anymore.

I’m aiming for levels of frustration now instead of despair. I don’t have to sail through adversity without reacting, but levelling the emotional surges might help. It’s the same as every time I restarted a sport each season: I’d drop catches in lacrosse that I knew I was capable of making, I’d get called up for stepping on the netball court or fall over on the lacrosse field, my fancy footwork no longer there. Was this frustrating? You bet, I’m sure I swore a fair bit, but was I despairing over it? No. I knew the skills would come back to me, I just needed to keep practicing. So maybe I can look at recovery as practice… not practice makes perfect, (I’m pretty sure striving for perfection is what got me in this mess in the first place), but allowing that things take time, that I can improve, and that it is going to feel uncomfortable to start with. And that with a step out of the comfort zone you can have lots of fun again, you can go on adventures, you can even go on dates again…

4 thoughts on “exiting the comfort zone”