Along with my Celtic skin and hair my Scottish ancestry brings with it a family motto or two. It seems that I’ve been employing more of one than the other over the last few years and this fatigued period in my life has certainly made it clear that toughing it out doesn’t always work for me…   So, my surname is Mackenzie and my mum’s maiden name is Russell. 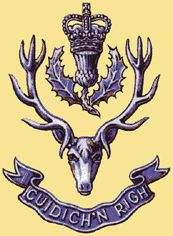 Mackenzie Motto No 2: Luceo Non Uro, I Shine Not Burn 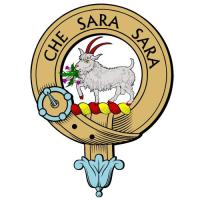 Russell Motto: Che Sara Sara, What Will Be Will Be (coined well before pop songs liked to quote it)

For years my default mode has been to tough things out, not to crumble under pressure, to be brave; whether this is making myself keep running in a lacrosse match, going without sleep while cramming for exams, jumping huge jumps on my horse, skiing scary runs or refusing to cry when I am lost in a foreign city… It’s probably less to do with my family motto and more to do with growing up with two older brothers who wouldn’t play with me if I “acted like a girl” but I’ve decided of late that I need to stop doing this and just accept that I’m burnt out and have to go with the flow. What will be will be (even if it will be bloody annoying and drawn out). So, less Mackenzie, more Russell: less bravery and shining, more of a nonchalant shrug at life…

In fatigue sense this means accepting when I hit the wall and not fighting, as it just takes longer to recover if I do. It means asking someone to drive me places when I’m wrecked rather than forcing myself to with the aid of caffeine. It means calling a friend at the last minute and cancelling plans because I really do just need to spend the morning sleeping and not feeling guilty about that. It means not making grand plans for my return to public life as it were as this just gets depressing; I choose to believe I will get better and I have two family friends’ recoveries to inspire me but stressing about when that will be and what I will do does not help. Not being brave doesn’t mean throwing myself a pity party, it just means being kind to myself and not pushing too hard. Accepting that sometimes I need to be vulnerable and, gasp, ask for help!

And since I know that anxiety puts me in a fight/flight mode and doesn’t help with fatigue at all (that shit is exhausting) I am doing my best not to engage in the cerebral wars my thoughts stage. It’s like a tennis match in my head at times the way the thoughts take off, bouncing around my head with Nadalesque speed and I’m really trying to avoid the fight, to avoid stressing my body out and to just accept that what will be will be.

Here’s an example of such a fight: 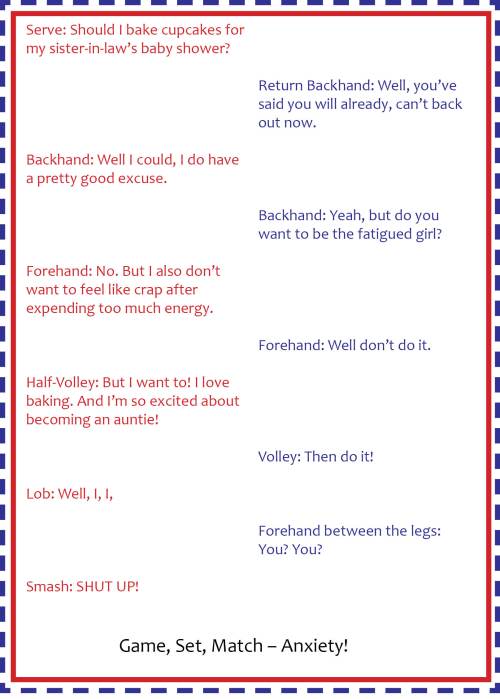 See? Exhausting! There’s no easy way to get out of a mental fight (even such a trivial one as this) but being aware that I do it is a first step, and trying to avoid engaging in the thoughts is the best way, ‘hey you freaking annoying thoughts, you’re not helpful, be quiet, I’m not listening’. Brave shiny Suze used to think it helped to fight against these thoughts, to rally forth with a sword and argue and analyse her way out, but no, it’s not, just shrug and say what will be will be.

Because the big thing I’ve realised in the past 14 months is that I’m not entirely miserable doing nothing… I’m not stressed out about work, my life is not timetabled down to the last minute and I’m not rushing anywhere. So, as crap as fatigue is, it’s definitely made me realise that toughing it out isn’t the best course of action for me, that it is ok to do nothing for a bit, that it’s ok to hang out on my own and watch tv and read books and just say no, not today, not for me. However, I would really like to go for a run again before I turn 30! Ok fatigue gods?

So I’m trying to keep my head in check and to be kind to myself and let things happen. I’m not going to get better by fighting through the haze of fatigue; it will just take longer, so there’s no point toughing things out. Yes I do need to see my friends and have some semblance of a social life but none of those important friends mind in the least if I excuse myself for a 20-minute powernap. And hey, has there ever been a better way to get out of drying the dishes and hanging out the washing? Got fatigue, can’t do it – turns next page of the book. Game, Set, Match – Snooze Mackenzie.