Last week I expended a huge amount of energy and subsequently crashed on the other side. And why did I do this? Why after such steely resolve not to keep pushing and crashing did I push and then crash? Well, for the most excellent reason that I became an Auntie.

Yes that’s right, my big brother Andrew and his wife Joey had a baby girl last week. Woo hoo! This was the first niece, first grandchild and first child for me, mum and dad and my brother and his wife respectively. Great excitement.

So the excitement started on Tuesday when first contractions were felt but we had to wait until Thursday afternoon for the good news (I know, we weren’t the ones in labour for 36 hours, but still it was tiring restraining myself from sending too frequent a text message asking for an update). So, two days of expectation then finally the good news and my energy started to be expended at an alarming rate… Dad called me and as soon as the words “baby born, called Eva” were out of his mouth I had hung up on him to call my big brother. There was a fair amount of squealing and bouncing on the spot and a huge grin cracking my face in half as I spoke to my brother who had become a daddy just a few hours before.

Then I realised it was at least 90 minutes until one of my parents would be home to drive me up to Melbourne to the hospital, god, how inconvenient. Instead of sitting quietly and waiting for my lift I stomped around the house indignantly wishing I could drive myself but one hour there, one hour back plus the excitement in between and I would have driven off the road! Hmm, no driving. Fucking fatigue.

Ok, after hurrying Mum up around the house as the menagerie of animals was fed I was finally in the car at 6pm; time to save my energy: “I am not talking, no one speak to me,” I said abruptly as I plugged my headphones in to my phone and pressed play on an audio book and tried to tune out. I was listening to a Tony Park novel being narrated that should have had me focused on the wilds of Africa as the safari guide avoided capture but my thoughts kept jumping around my head in excitement and I had to press rewind several times on my phone.

We found a park and navigated the labyrinthine floors of the hospital and then we were rounding the corner to room 30. And then I was an auntie. 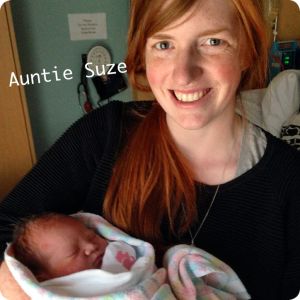 I must admit I was a bit remiss in focussing on the new parents as I bolted over to the basinet and found a baby. My brother’s baby. The family’s baby! The next generation had begun. I’d never held a new-born before and had thought I’d be scared but I just about snatched her out of her Granny’s arms so I could have a hold. I’d planned to be there half an hour max but 30 minutes turned in to an hour and the new parents were not the only ones looking exhausted… Whoops, energy reserves are depleted, must stop and be still and refuel now. 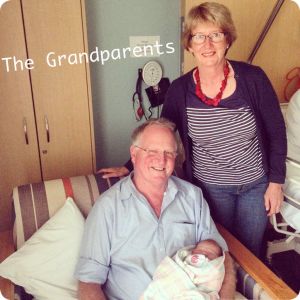 After we reluctantly left the room, still waving like fools to the baby who couldn’t see us we bolted to a nearby pub to have dinner at 8.30pm. The waitress must have thought us rather strange as we sat there looking very much related but all on our phones sending off photos of Eva all around the country not talking to each other (wait, that’s normal for my generation!). Real aunts and uncles were notified, surrogate aunts and uncles who’ve known us just as long as the real ones were texted and this photo was sent in to the world on social media. 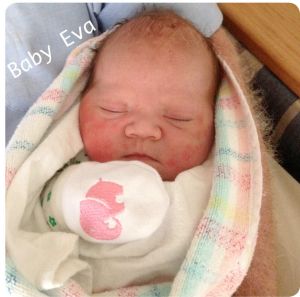 I’d brought my pillow and rug in the car and was snuggled up in the back and half-comatose before we’d left the city skyscrapers behind – but what a special night.

I woke up the next day in a world of pain and didn’t move until 11am despite an insistent bladder informing me that I should definitely get up. Mum came in to the room and force fed me, quoting myself back to me, “food is fuel”, and for the first time in a long time I wasn’t angry with myself for crashing. There was absolutely no way I wasn’t going to meet my brand new niece, her skin still wrinkly from her extra week in the womb, I wasn’t going to not congratulate my brother and my sister-in-law and call them a Mummy and a Daddy and stroke Eva’s supremely soft face as she made sucking noises in the air and had no idea who these people were who kept playing pass the parcel with her. So that was a crash well worth it.

I’m writing this post at home three days since I hit the wall and all I wanted to do today was to go up to the hospital. I woke up, determined to train and taxi my way to the maternity ward, ate breakfast, called my brother to check it was ok and was just checking the train timetable when the annoying voice of reason started demanding to be heard.

Not a good idea Susan. Whatever. You’ll regret it Susan. Shut up. You’ve only just got over the last smash and crash in to the wall. Pfft, I’m strong, I’m tough, I’ll be fine. Really?

I showered and felt a bit dizzy. It’s nothing. But when I had to sit down halfway through blow-drying my hair I finally accepted defeat. Not today. After all, it’s not as if Eva will know I didn’t make it up today, I’ll try again later in the week. And I am very comfortable in the knowledge that I am the only Auntie, which means I am automatically the best one : )