Five years ago I came back from an overseas trip with what I thought was the worst case of jetlag ever recorded… So began a 4.5 year recovery journey from chronic fatigue. Some days I doubted if I’d ever leave the house again, let alone travel again; travel was where I came undone, it was a risk, it was an unknown, would I ever do it again? The answer is, yes!

I recently returned from three weeks in France on what my mum and I called the “celebration of health tour”. We celebrated my recovery from CFS, we clinked our glasses to health and lived the good life. I did whatever I felt like doing, with no adding up of energy credits or spoons, with no fear and with sheer joy in being free and active and adventurous again. 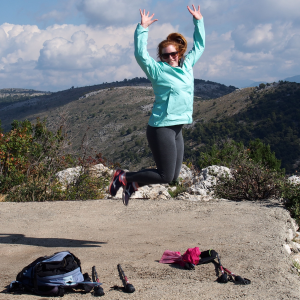 This picture is of me jumping for joy on the top of the Baou de St Jeannet in southern France, having hiked up its steep spine. I was sweaty and hot and out of breath and my legs were complaining but I had done it and I was alive! When I posted this pic to facebook a friend jokingly asked if I was feeling metaphorical, yep, I’d climbed a literal and metaphorical mountain, hauling my unfit body to the top of the Bauo, and clawing my way back to full health from the depths of CFS.

I had a few seconds of worry when I felt my backpack sticking to my sweat-soaked t-shirt… sweats usually meant I’d overdone it, was this ok? It sure was, I realised everyone else was puffing like crazy and wiping sweat off their brow and one lady even had a redder face than mine. Oh right, I’m climbing a mountain, that’s supposed to make you sweat, I adjusted the pack and kept walking.

I think most people are pleased when they reach the summit of a mountain or complete a walk with an amazing view, but I doubt many are as thrilled as I was that day. My smile muscles started to hurt, I shook my head in wonder, I was on top of a mountain, I was well, I was healthy, I was alive. Sitting up in bed used to be an effort, showering used to send me back to sleep but here I was hiking in France. Back in the grips of CFS, once I had stabilised to a point that it wouldn’t make me worse I started off walking 20m at a time to rebuild my wasted muscles, with a mere 5 metre progression each week. To go from 20m at a time to standing on top of a 800m high mountain, well you can’t buy that kind of pleasure, or pride. I was so proud of myself for getting there, for all the hard yards, for progressing, for not letting the despair and depression consume me. I was so grateful for my recovery! I was so grateful for the friends and family who’d supported me along the way. I was grateful to be alive.

Mum and I on tour!

It’s a scary fact that this illness can lead to suicide and that very horrifying thought certainly crossed my mind on my lowest days. I never planned anything, but I remember saying to myself, if this doesn’t get better I’m out, if this doesn’t get better I’m not living like this, I’d rather die. To go from these dark thoughts considering the worth of my existence, seeing no hope for the future, and feeling completely lost, to travelling on the other side of the world loving life, well it’s fair to say it was quite a transformation. Standing on the summit of the Baou I shook my head in wonder, I was better, how, what, how? Don’t question it, just live.

While in France I walked the street of Paris confidently, no measuring of metres here, I just walked, taking in the sights, confident in my body. Sure my feet were sore by the end of the day, but that was the only side effect of kilometres of walking and window shopping. My mum and I did a fair amount of actual shopping too, and the most beautiful department store, the glorious Les Galeries Lafayette drew us in. I breezed through the crowd of people, unbothered by it, walked around and around and up and down. I remembered going shopping with my mum in a department store 3 years earlier – I‘d had to sit on the floor of her change room I was so exhausted, and the prattle of all the people had me confused, let alone the different lights and sounds and colours of a big store. This time I loved it. 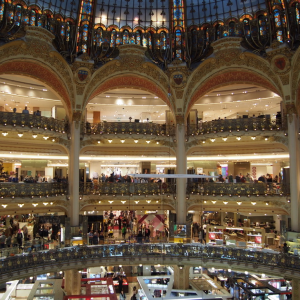 When I ventured down south to the Côte d’Azur and Provence I enjoyed exploring the beautiful landscape. I was with quite a few French speakers and found my language skills from high school French coming back to me. I remembered more and more words and joined in these conversations. I thought to myself, wow my brain fog used to be so bad with CFS I struggled to spell my name, but here I am conversing (and mostly understanding) a conversation in French.

There was a time when the thought of meeting new people overwhelmed me, it would be too much effort, too much energy, just too much. In France I delighted in meeting new people, was friendly to everyone and introduced myself happily. At the yoga retreat I went to down south we bonded immediately over our love of yoga but quickly learned that we had more things in common, eating out at a different restaurant each night, annoying the other diners with our raucous laughter and our strange German/English/French patois. It was fun, it was exciting, it was memorable and it wasn’t tiring!

While I was sick I avoided alcohol, it used to undo me, my head would spin after a few sips and if I did drink more I would be horribly hung over. CFS is like a bad hangover anyway, so I avoided it. They actually say a lot of people with CFS have an intolerance to alcohol. In France though, fully recovered, I had a wine most nights, delighting in the different vineyards. I discovered an aperitif called Suze and had to drink it – of course. I met up with a friend from school in Paris, and after “drinking Suze with Suze” and finding this far funnier than it was I woke up with a hangover. I groaned, had a cup of tea, got dressed, climbed down six flights of stairs with my pack on my back and made my way to a train station to catch a train five hours on my own – I drank a rare can of Coke on the train, my hangover demanded it, but that was it. I was just a normal traveller who had had a bit too much to drink the night before, no big deal. Catching the train an hour to Melbourne used to be an ordeal, and something I had to weigh up each time I did it, now, 5 hours on a train was no problem. 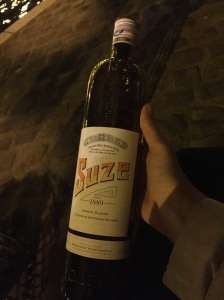 Upon returning to Paris I went to pick up a bag I’d left in the luggage lockers at the station. For some reason I couldn’t find the luggage lockers though and as I did countless laps of the station I realised it was going to shut soon, it was nearly 10pm. I started to run. As I sprinted around the train station and breathlessly asked for directions in French I was worried; worried the luggage centre would close and I’d have to come back first thing the next morning, negotiating the train system again… I was worried about the inconvenience of having to return another time. Pah, that was nothing. I remembered when I used to be worried if I could stand long enough to make the tram ride or if I’d have to ask someone to give me their seat. I remember when I had to nap twice on the one-hour drive home because I was terrified I would fall asleep at the wheel. This was nothing. I kept running, spoke bad French and finally understood “you have to go up to go down” and after several staircases found my bag.

when you buy a pastry as big as your face…

On my trip I took delight in food, I was in France after all! I ate rich French food, drank lovely wine, indulged in pastries and cakes, ate crepes from the street vendors and just enjoyed it all. I remembered back to the start of CFS when I lost 10kg in a month because I could barely eat. It’s safe to say I did not lose weight on this trip! I did two cooking classes as well, learning how to make croissants, tarte tatin, salmon tartare and salmon gravlax – yum!  I probably enjoyed the classes more than anyone because I remember not being able to stand up in a kitchen for more than 10 mins, and having trouble reading a recipe.

I seriously wondered if I would ever travel again, so to find myself in Paris and Provence and the Côte d’Azur had me smiling in wonder. Seriously, I’m here!? This isn’t one of the many audio books I listened to set here, back when I couldn’t leave my bed or read a book? But me physically here? Ok, cool, I’ll take it. I’d gone from not living outside my bedroom, to contemplating whether it was worth living, to living my life again in full. And not once did I scan a room for a place to lie down, that is a thing of the past now. 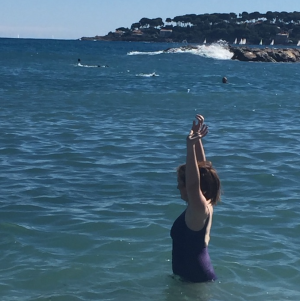 swimming in the Mediterranean Sea