The big news is that I went skiing last month. Yep, that’s right, me, the CFS warrior went skiing. Woo hoo! And why haven’t I shouted this from the rooftops and stamped it all over social media? Why haven’t I yelled loudly and proudly about achieving this goal I set two years ago? Well, I wasn’t sure how to explain that I did something as insanely energetic as skiing, yet I still have chronic fatigue…

I had this rather large fear that people were going to misunderstand and think that I was magically cured and expect me to jump back into life, or worse, would assume I had been faking this insidious illness all along. Neither are true of course, and I probably wasn’t giving friends and family nearly enough credit in this fear, but it was there all the same. Yes, I have improved enormously from when I started this blog, but I’m hesitant to share big wins like this because people don’t know what goes on in the background to make big days like these possible. But I am writing about it now, to share with the blogging world that you can progress in recovery from CFS, you can have fun again, you can achieve goals and you can go fast again. 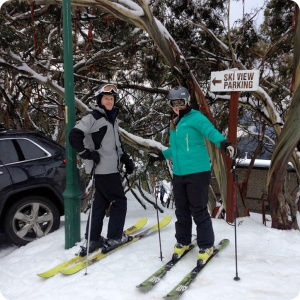 So, I was up on Mt Buller in the Victorian high country, grinning just as much as I had the first time I came up the mountain at the age of 5. I had been working towards this goal for two years, since I last came to the ski club but was far too sick to ski and I was doing it; I was about to ski! I’d been visualising skiing again for over a year, imagining myself doing the awkward walk in ski boots, putting on my helmet, dropping my skis onto the snow, clicking my boots into the bindings and making that first turn; I’d seen it so many times in my mind, now it was happening. I clicked into my skis, stomping down on the bindings, hearing that satisfying clunk, took a very deep breath, shoved away all the legitimate fears I had about what I was going to do and pointed my skis straight down. Of course it all came flooding back to me, but that first push off was so hard to do, I had to trust that my body was ready for this, that I was strong enough for this, that I would be ok, that I could come out of my carefully curated comfort zone and do something wild, do something so totally un-CFS and have fun. That I wasn’t about to undo all my hard work…

The last time I did something like this was when I went surfing in 2015 but that was spontaneous, in actual fact it was to impress a boy, this was not spontaneous or to impress a boy – it was meticulously planned and was for me and me alone. And the plans I made? Well, I was able to get to the mountains as my brother, Michael and his girlfriend, Toni drove me the four hours up the mountain, leaving home at 5am. Instead of joining them to ski the first day I spent my time in the lodge, recovering from my early start and time in the car by resting in bed with a podcast, doing some stretches, visualising my first ski, enjoying the amazing view and trying to slay the anxious thoughts that were telling me I was about to do a very stupid thing.

Once out on the mountain I set my alarm on my phone for two and half hours, turned it up loud, and knew I had to head back when I heard my pocket beeping. And I did. There was a hot chocolate stop on both days, I stopped a few times down each run to get my breath (realising what a novelty it was to be puffed again) and found the chairlifts to be a wonderful reprieve from supporting my own bodyweight. Once back in the lodge I went back to bed for about three hours, had lunch, rallied, went out again and then, you guessed it, went back to bed. I had my foam roller in my bag to roll out sore skiing muscles, many kinds of painkiller (narcotic and natural) in my bag and all the meals were pre-cooked. I was in fact fine the Saturday night and looked around the room wondering if this was in fact reality or I’d fallen through the looking glass. It was real, and my body was ok!

I went out again the next morning and returned to the lodge feeling fine but well aware I was pushing it. I was strong enough to ski because of my walking routine that had be up to 3km most days, because I’ve been doing daily yoga for 12 months to get my muscle tone back, and for the last four months I’d been doing physio exercises morning and night, so it was awesome to test my body and feel strength again, and know that all my hard work was paying off.

And did I gently go around the mountain, sticking to the baby runs? I did not, I fanged down the runs, I swerved this way and that and nearly got collected by a rogue snowboarder and still stayed on my feet – my core strength had returned! It was such a novelty to do something fast again, to experience speed!! It was freeing and exhilarating to not be pacing myself for once, to just go. I’d done the work and the planning so that I could ski, now I just had to stick to my time limit and enjoy myself. My brother even warned me I’d get my lift pass taken off me as I was going too fast through the slow zone, tucked down in a ball, loving the feeling of cold air whacking my face as the white world whirred by.

Did I get away with all this? No, I did not. The fatigue hit about 3pm that Sunday afternoon when I was packing my bag and I spent the trip home in the car wrapped in a blanket and feeling sorry for myself. Here we go, I thought, this is going to be nasty… And it was, I won’t lie about that, but it was worth it. It was worth experiencing the heinous payback the following four days because I’d achieved my goal, I had tasted real life and strength and health again and I wanted more. Was I thoroughly miserable and in pain while I spent all day in bed avoiding light and sound stimuli, my brain feeling like it was chiselling its way out of my head, nausea plaguing me? Yes, I was. Did the debilitating fatigue have me sitting on the floor of the shower because I’d tried to wash my hair? Yes, it did. But this lasted for a mere four days. Four days! Crashes used to last four weeks! The first four months of this illness were almost unbearable, I could handle four days. On the Friday I felt the fatigue finally shift, it was like a shroud was lifted off me and my vision was clearer, I was no longer dizzy, my headache was gone, food no longer revolted me and I was capable of driving down the coast to spend a few days with some friends. What a bounce back! 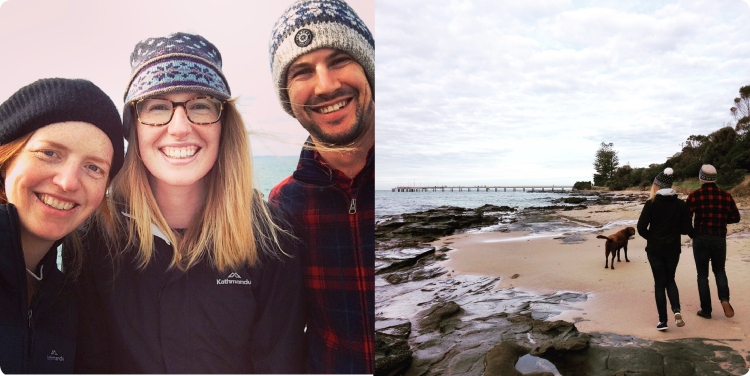 One of the ways I measure my progress in recovery is by assessing the bounce-back time. Rather than purely focussing on what I can do in terms of kilometres walked or hours spent reading I can go to an important event or achieve a goal and measure how long my body pays me back for it. For me to go to the snow, to test my body in such a big way and only pay for it for four days was a sign that I was getting better! Two years ago the mere trip to the mountain led me into a two-week crash. The night before I skied I barely slept due to anxiety; the thoughts raced through my mind, asking me why I was risking my fragile health, potentially setting myself up for a setback and about to experience the misery of a CFS flare intentionally. So why did I do it? Because I needed something to look forward to over the last few years, something to achieve, something to aim for, something to get me out of bed in the morning, something to work towards that convinces me I will reclaim my life. Something to keep my mind out of the misery that this illness can be, to feel that rush of endorphins and smile uncontrollably. To feel speed again. To feel my body move again. To know that I am getting better, that skiing last year or the year before was totally out of the question, but this year I could do it; I am getting better! And while I did crash after my adventure to the snow, it was the first time I have fully crashed from CFS all year! 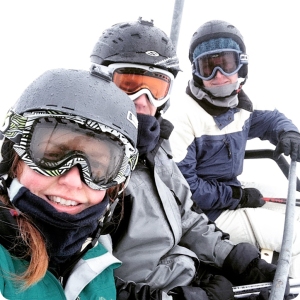 And in amongst the fear and the planning and the doubts did I have fun? YES I DID. I was high as a helium balloon, the happiest I’ve been in years, I felt free and strong and wild and hopeful. For those collective six hours that I spent on the slopes I think I was the happiest person on the mountain, if not all of Australia, and I think I was due some happy time, no matter the consequences. I was doing jumps over some bumps, spraying my brother with snow with a hockey stop by the lift and precariously holding my phone out on the lift to take pictures of our grinning faces. What a contrast. This time last year I was inconsolable about still being sick, about watching everyone else progress in their lives and me just stuck in nasty CFS land, brain fog and pain and fatigue ready to gang up on me at any time. As I struggled through those first few painful and scary days – and hey it was only four days of severe symptoms, that’s actually amazing – I asked myself why the hell I did it. I took this video after my first ski in four years and I think it says it all…

While I was confined to bed I watched and re-watched it, searching the lines of my ecstatic face, listening to the pure joy in my voice and seeing the shine in those eyes that have spent too much time hiding from the light and yes, it was worth it, even just six hours of happiness like that in a whole year would be worth it. I came across this quote by Thomas Morduant in a book I read earlier this year and it seemed so appropriate for this adventure:

And I enjoyed my crowded hours!